Both spiritually induced intoxication, as well as intoxication induced by spirits of alcohol, involve departures from the realm of rationality. However, each does so in a completely different way from the other. Moreover, each form of intoxication leads an individual to totally different results and ramifications.

Nonetheless, on the whole, most people do not have to drink a great deal before their memory and thinking faculties become impaired. Not only does one begin to lose the ability to concentrate on, and carry out, a variety of logical/rational operations, but one's capacity for making different kinds of judgement also is diminished after drinking a certain amount of alcohol.

After drinking, all too many people get in their automobiles and cause death and tragedy, of one sort or another. Almost invariably, this is as a result of their impaired: reflexes, reasoning abilities and capacity to make rational judgements.

There also is a long history between consumption of alcohol and sexual assault. Perhaps alcohol is used as an excuse by some in order to diminish the moral blame associated with such acts. Maybe these people would indulge in acts of sexual assault even without the alcohol, but the alcohol becomes a convenient scapegoat. Alternatively, due to the diminished capacity induced by alcohol intoxication, people often find themselves doing things which would be repugnant and horrifying to any rational person.

Even when no sexual assault is involved, many people end up doing degrading, demeaning things to themselves and others while operating with impaired reasoning processes due to alcohol intoxication. People wake up the morning after the previous night of intoxication only to discover they have done terrible things of which they have either no, or only a foggy, recollection. One does not have to commit criminal acts in order to seriously injure, emotionally and psychologically, others or oneself.

None of the foregoing necessarily touches on the more complex problem of alcoholism. In other words, one does not have to be an alcoholic in order to become involved in the sort of problematic ramifications of alcohol consumption which have been outlined in the foregoing examples of impaired rational thinking and judgement.

Many people who get intoxicated may never, ever do anything injurious to anyone. Whatever impairments of reasoning and reflexes which occur with these people may be just harmlessly amusing. Nonetheless, this is just not so for millions of other human beings.

The nature of spiritually induced intoxication is an entirely different kettle of fish. Although this kind of intoxication also involves a departure from reasoning processes, this is not due to any sort of impairment of rationality or judgement.

In relation to the condition of spiritual intoxication, rationality actually constitutes a state of diminished capacity. In fact, some Sufi masters liken the condition of rationality to a state of being inebriated with the wine of logic. No matter how good the vintage of this wine may be, it impairs one's spiritual judgement and interferes with mystical understanding.

The practitioners of the Sufi path note, however, that mystical understanding does not interfere with rational processes. Rather, such understanding informs and illuminates those processes.

When one spends time with Sufi masters, the nature of their logic, judgement and reasoning is impeccable. The counsel and advice they give is very practical, logical and down-to-earth.

Sufi masters use reason, logic, and rational judgement to help people with their worldly and spiritual problems. Nevertheless, in order to be of help, the reason and logic must be infused with, and oriented by, the realities of spirituality and mystical transcendence.

Rational processes, in and of themselves, are not enough. One cannot reason one's way to spiritual truth or wisdom.

Although there may be certain theologians who would disagree, a person in a state of spiritual intoxication does not do anything to degrade or demean oneself. Moreover, a spiritually intoxicated individual does not sober up later on only to discover some terrible deed or deeds which had been committed while in an intoxicated condition.

At best, a person who becomes intoxicated through the consumption of alcohol may get a certain amount of relaxation and enjoyment from the experience. There are no deep truths or wisdom which arises out of alcohol intoxication. One is pretty much the same after the experience as one was before it.

According to Sufi masters, outward manifestations of spiritual intoxication are, under certain circumstances and conditions, perfectly acceptable. Indeed, such mystical states are a sign of God's grace.

Nonetheless, Sufi shaykhs indicate that when an individual is permanently in a state of outwardly manifested intoxication, this condition is problematic as far as making continued spiritual progress is concerned. Such people are, in a sense, transfixed by their overwhelming experiences of spiritual intoxication.

Consequently, they are unlikely to move on to further stages of the mystical path. Their progress is arrested at a particular stage and state. Spiritually speaking, their permanent condition of intoxication sacrifices movement toward the full realization of human potential for the bliss and ecstasy of the on-going condition.

Although such permanently, spiritually intoxicated individuals are harmless and, quite often, are sources of blessings for many who come into contact with them, in their own way, many of these people (but not all) are the alcoholics of the spiritual world. This is so in the following senses.

These people are irresistibly drawn and, in a sense, addicted to the continuously intoxicating experiences with which their spiritual condition is saturated. Moreover, like their worldly alcoholic counterparts, those who permanently are in a condition of outwardly manifested intoxication frequently lose the capacity to function in a "normal" way in society and the work-a-day world.

Sufi shaykhs recommend travelers of the Sufi path should become outwardly sober, while remaining inwardly spiritually intoxicated. In other words, one needs a foot, so to speak, in both the physical world and the spiritual world in order to be a fully effective human being in both worlds.

Sobriety is expressed through the observance of spiritual etiquette. To be sober in the spiritual sense, one must fulfil one's spiritual duties and obligations on all levels of existence. Nevertheless, one cannot perform these duties properly unless sobriety is underwritten by the truths and wisdom of spiritual intoxication.
Posted by Anab Whitehouse at 2/20/2010 07:21:00 PM 2 comments:

Email ThisBlogThis!Share to TwitterShare to FacebookShare to Pinterest
Labels: Anab Whitehouse, Bill Whitehouse, Streams to the Ocean - A Contemplative Introduction to the Sufi Path, sufism, tasawwuf 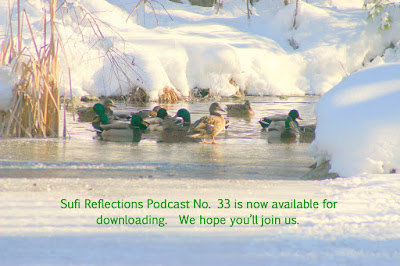