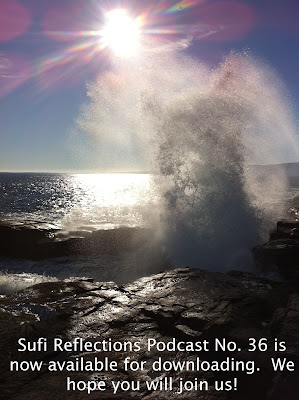 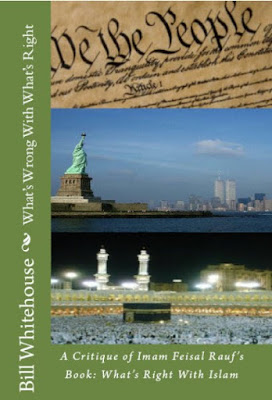 Imam Feisal Abdul Rauf is at the center of a controversy concerning the proposed community center in Manhatten, New York -- a center known alternatively as: Cordoba House, Park51, and the Ground Zero mosque. Consequently, people -- both Muslims and non-Muslims -- might benefit from a critical examination of his ideas concerning a wide variety of issues.

'What's Wrong With What's Right' is a critique of Imam Feisal Abdul Rauf's book: What's Right With Islam. Throughout his book, Imam Rauf seeks to draw parallels between, on the one hand, constitutional democracy in the United States and, on the other hand, the nature of Islam.


He seeks to argue that they both share a similar approach to ideas such as: rights, freedom, purpose, and morality. However, he often does the foregoing in problematic ways both with respect to his explication concerning the nature of democracy, as well as in relation to his explanation of Islam.


Unfortuantely, Imam Rauf stumbles into very dangerous territory when he seeks to put forth an argument which maintains that because both democracy (through the notion of inalienable rights that are endowed to us by our Creator) and Islam (through the guidance of revelation and the Prophetic tradition) are rooted in Divine authority, then, a person is under an obligation to follow or obey whatever leaders are in power (within a democracy and/or an Islamic state) provided that such leaders act in accordance with the principles and values established by Divinity.

However, Imam Rauf fails to convincingly demonstrate -- either with respect to democracy or Islam -- why anyone should accept his interpretation of either democracy or Islam. As a result, Imam Rauf adopts a variety of positions concerning: 9/11, corporations, the Iraq/Afghanistan wars, banks, foreign policy, capitalism, the Declaration of Independence, the Constitution, The Bill of Rights, Islam, shari'ah (so-called Islamic law), and the Sufi path that may not be tenable.

Imam Rauf is a person who is one of the leaders of the group of individuals who are at the center of the storm surrounding the proposed community center (also known as Cordoba House, Park51, and the Ground Zero mosque) in New York City. Given his centrality in that controversy, the process of critically exploring Imam Rauf's perspective concerning a variety of issues may be of value to both Muslims and non-Muslims.

Three years after 9/11 Imam Rauf wrote a book -- namely, 'What's Right With Islam' -- in relation to some of the aforementioned issues -- and, therefore, his book offers an opportunity to engage what he has to say and reflect on such matters. The fact that many people -- both Muslim and non-Muslim -- have endorsed Imam Rauf's book raises some important questions concerning such endorsements -- especially if the critical commentary in 'What's Wrong With What's Right' constitutes an accurate and fair critical assessment of Imam Rauf's ideas.


To name just a few of the fruits of such a poisonous tree, one might mention: The Federal Reserve Act of 1913. The entire Act was put together in a secret meeting on Jekyll Island, off the coast of Georgia, by a group of seven individuals (Charles, Norton, Paul Warburg, Nelson Aldrich, Benjamin Strong, Abraham Andrew, Henry Davidson, and Frank Vanderlip) who represented a variety of private banking and financial interests and, then the Act was guided through Congress by people (such as Nelson Aldrich, who was the Republican Whip for the Senate) and who knew that the proposed Federal Reserve would not be a Federal institution but a corporation that served the interests of a consortium of private member banks rather than  the interests of the vast majority of the people of the United States and which, for the most part, would be beyond the control of the Federal or State governments.
The foregoing was a clear violation of the guarantee of republican government. This is so not only in relation to the influence which special interests had in constructing the legislation concerning the Federal Reserve (and, there are many, many cases in which private lobbyists and special interest groups write the legislation which is voted on – often unknowingly -- by members of Congress), but the failure to observe the requirements of republican governance also reflects how many people in Congress failed to exercise reasonableness, integrity, honor, impartiality, honesty, judiciousness, impartiality, and benevolence (to anyone but the bankers) during the process of passing the Federal Reserve Act.
In fact, much of the legislation that deregulated the financial industry – e.g., the Glass-Steagall Act of 1933 – and which laid the groundwork for the creation of intentionally complex and mystifying financial instruments, such as derivatives, is unconstitutional. This is because the manner through which many, if not most, of the deregulatory laws came into existence violated the peoples’ right to republican governance … that is, many individuals who were involved with the passage of such legislation were not people with: honor, integrity, honesty, judiciousness, benevolence, impartiality, egalitarianism, independence, and high-mindedness that was free of all self-interest and private passions concerning such legislation.
Another example of the fruit of the poisonous tree concerns corporations.  In today’s world, corporations possess great power, have most of the rights and protections of actual human beings, and, yet rather ironically, often don’t have any of the responsibilities of biological persons.


Once all the witnesses and evidence have been presented, the prosecutor leaves the room where the grand jury has been convened. The jurors then discuss and explore the issues among themselves as to whether, on not, they believe sufficient evidence has been presented to underwrite an indictment of the accused individual.
The understanding of many people – including that of some lawyers and prosecutors – concerning the idea of a grand jury tends to end at this point. In other words, once the grand jury reaches a decision concerning whether, or not, to indict someone, then supposedly the work of the grand jury is complete.
However, a grand jury does not serve the state or its legal officials. The grand jury serves the people, and the reason that the idea of a grand jury has been enshrined in the 5th Amendment is to preserve the civil liberties of citizens.
Consequently, on the one hand, grand juries are the last outpost of protection for citizens against arbitrary and unwarranted prosecution by the government. However, on the other hand, grand juries also are a constitutionally authorized forum to ensure that the government is not undermining the civil liberties of citizens in ways that may extend beyond the interests of any given district attorney, attorney general, or other legal representative of the government.
Once the immediate reasons for which some level of government has convened a grand jury have been served, a grand jury is free to pursue any other issue that is of interest to the members of that jury which carry implications for the civil liberties and rights of citizens. Many district attorneys and attorney generals who actually know about this dimension of the power of grand juries are often not inclined to share such knowledge with the members of a grand jury and, thereby, help those members understand the full potential of their power under the Constitution.
The powers of grand juries are entailed by the guarantee of a republican form of government for the states. The powers of grand juries are entailed by the rights inherent in the 9th and 10th Amendments – rights that belong to the people and not to the central government. The powers of grand juries are entailed by the principles given expression through the Preamble to the Constitution. The powers of grand juries are entailed by the priority that people have over governments through the natural, inborn rights of human beings and from which governments derive whatever authority they have.
By passing legislation that created the 9/11 Commission, Congress usurped the rights and powers of grand juries to make determinations and judgments in such matters. By passing legislation concerning 9/11, Congress attempted -- in contravention of the amended Constitution -- to deny and disparage the rights and powers of the people  … rights and powers that could be exercised through venues like, but not restricted to, a grand jury.
Furthermore, by participating in a commission which was without constitutional authority, each of the Commissioners, as well as the executive director of the Commission, and all of the Commission researchers did also effectively deprive the American people of the latter’s 5th, 9th, and 10th Amendment rights. I do not call what the various participants did a conspiracy, but, rather, each person acted individually and, probably without any real understanding of the nature of their unconstitutional behavior. However, whether done unknowingly or knowingly, all those individuals were, nonetheless, still denying and depriving American citizens of their Constitutionally established rights by working with and on the 9/11 Commission.
Article II, Section 2 of the Constitution indicates that the President shall: “appoint ambassadors, other public ministers, and counsels, judges of the Supreme Court, and all other officers of the United States whose appointments are not herein otherwise provided for, and which shall be established by law.” In conjunction with the 9/11 Commission, the President did appoint, first, Henry Kissinger, and, then, Thomas Kean to serve as Chairman of the 9/11 Commission.


Time is running out. Important choices need to be made now, or very soon the capacity to choose might be ripped from our hands by social, political, and economic events that could inundate us in an irreversible fashion.
Posted by Anab Whitehouse at 9/01/2010 04:38:00 PM 13 comments: